Bisphosphonates (BPs) anti-fracture efficacy may be due in part to inhibition of osteocyte apoptosis. This effect requires opening of connexin (Cx) 43 hemichannels and phosphorylation of the extracellular signal regulated kinases (ERKs). However, unlike ERK activation by other stimuli, the Cx43/ERK pathway activated by BPs does not result in nuclear ERK accumulation. Instead, the anti-apoptotic effect of BPs depends on phosphorylation of cytoplasmic ERK targets and is abolished by forced nuclear retention of ERKs. We now report that ERKs and the scaffolding protein β-arrestin co-immuno-precipitate with Cx43 in MLO-Y4 osteocytic cells and that the BP alendronate increases this association. Moreover, ERK2 fused to red fluorescent protein (ERK2-RFP) co-localizes with Cx43 fused to green fluorescent protein outside the nucleus in cells untreated or treated with alendronate. Alendronate does not induce ERK nuclear accumulation in cells transfected with wild type β-arrestin (wtARR) or vector control, whereas it does in cells expressing a dominant negative β-arrestin mutant (dnARR) consisting of the β-arrestin-clathrin binding domain that competes with endogenous β-arrestin for binding to clathrin. Alendronate activates ERKs in dnARR-transfected cells as effectively as in cells transfected with wtARR, demonstrating that dnARR only interferes with subcellular localization but not with activation of ERKs by BPs. Further, whereas alendronate inhibits apoptosis in cells expressing wtARR or vector control, it is ineffective in cells expressing dnARR. Thus, BPs induce the formation of a complex comprising Cx43, β-arrestin, and clathrin, which directs ERKs outside the nucleus and is indispensable for osteocyte survival induced by BPs.
Keywords: osteocyte, bisphosphonate, beta-arrestin, apoptosis 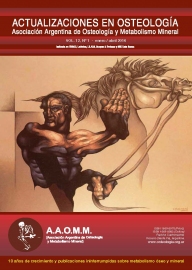